Do you have any New Year’s resolutions you wish to share with us?

“I really hate how people talk trash about other people trying their new year resolutions. More people might stick to their resolutions if they didn’t feel like everyone is already expecting them to fail. So, why doesn’t everyone stop complaining about how crowded their gym is and use that energy to inspire or say something nice to someone who may be a little out of their element while trying to better themselves.”

What are your thoughts about my Facebook rant? Do you have any New Year’s resolutions that you wish to share with us?

I have to confess that I don’t usually make any resolutions on January 1, mostly because I’ve always been in education—either as a student or as a professor—so for me, my new year always begins in August. New Year’s day has never been a time for me to sit down and evaluate (or re-evaluate) how my life is going and to pontificate what changes I want/need to make, so I don’t really understand this yearly winter ritual when people take stock of the person they are and the person they want to be.

I will also confess that I am one of those people who hates going to the gym in early January because the crowds of “I’m going to lose weight this year, so I better get to the gym for the first two weeks in January before I go back to being who I’ve always been” just get in my way and mess up the routine I’ve had in place all year. You’re right, Jen, that people like me should probably be more encouraging of those who are trying to make positive changes in their lives, but it’s hard for me to do this when these people post all their crap on Facebook and then fall off the radar five to seven days later (if they even last that long). Why can’t people just make their life changes without chronicling the first few days of their new “lifestyle”? Just get up every morning and do whatever it is you say you’re going to do. As Nike says, “Just do it!” 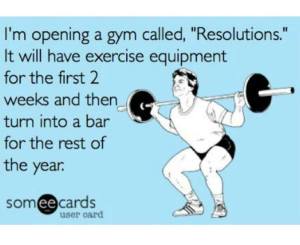 For those who say that losing weight and getting healthy are two of their New Year’s resolutions, just remember that it’s your food intake that you must first control. Exercise is nice and it’s a good way to increase your metabolism, but it won’t burn off the bad stuff you eat during the day. (For example, a four-mile jog will only burn about 450 calories, and this won’t negate the cheeseburger and fries you eat for lunch.) If you’re worried that you don’t have time for or cannot commit to going to the gym three or four days/week, take a 45-minute walk every day. You’ll only need a good pair of walking shoes and the motivation to go. When you can commit to walking every day—even in bad weather—for a month, you’ll know that you’re ready for a gym membership.

Do go for a 30-minute walk every night after your last evening meal, and do not eat dinner after 6 p.m. But, most of all, ditch the sodas—diet and regular—eat more fruits and vegetables, eat breakfast every morning, cook more at home, and drink 64 ounces of water EVERY single day. You cannot undo bad habits overnight, so don’t beat yourself up if you slip back into your old ways. As Yoda says, “You must unlearn what you have learned.” Get back to doing what you say it is you want to do and don’t spend any time worrying about how you got off track.

So what New Year’s resolutions would I make for myself if I made New Year’s resolutions? I’d like to be more open to hearing the different opinions of people with whom I may disagree, but I have to admit that it’s hard for me to listen to folks who are uninformed and are blissful in their ignorance. I’d like to write more so that by the end of 2015, I will be the “Black Dear Abby.” I’d like to be more patient, I’d like to be more forgiving (of myself and of others), I’d like to be less judgmental, and I am hoping and praying that my friend Kim Chance (from all the way back to Woodrow Wilson Junior High School in Moline, Illinois, home of the John Deere Tractor) KEEPS KICKING CANCER’S ASS! I’d like at least one of my gay friends to get married and invite me to be their flower girl at their wedding. (Have blonde Afro wig; will travel!) I’d also like to lose these last three pounds, but maybe 2015 will be the year that I finally embrace the fact that I look pretty damn good for a 30-year old woman who graduated from high school in 1986. 🙂

I’d like for there to be peace in the Middle East and in other parts of the world and between Republicans and Democrats in this country, but since that doesn’t seem possible right now, I’d like for people on both sides of the political spectrum to be nicer to each other. Speaking of politics, I’d like for politicians to remember that their first job is to serve the people who bothered to get out and vote, and I’d also like for more people to actually get out and vote. Yes, it’s true that sometimes it seems like we’re choosing between the lesser of two evils and that oftentimes people vote against their best interests, but it’s not fair that a small group of voters are the ones who are deciding who will represent the ideas and wishes of the larger population. Furthermore, if you don’t bother to vote—especially in the primary elections—you shouldn’t bother complaining when your “elected” officials pander to the will of the lobbyists and not to the will of the people.

I’d like for those who say that they’re Christians to behave in a more Christ-like manner—to take care of the sick, the poor, the elderly, and all those who truly cannot take care of themselves—and for conservative Christians to stop using the Bible to explain why they are so nasty and mean to the people they say aren’t following Jesus’s ways. Leave the gays alone already. They aren’t the reason for your second (or third) divorce, nor are they the reason your baby’s father left you. I’d also like for conservative Christians to stop sending me racist Obama memes. Speaking of President Obama, I’d like for white people to stop blaming the POTUS for the situation they’re in. If you’re not doing well in life, don’t just blame the black dude in the White House; blame yourself and your poor choices and start making better choices. I’d like to stop yelling at my students, but if I stopped yelling at them, they wouldn’t know how much I loved them. 😉

I’d also like for the Fox “News” pundits to stop making white people so afraid of black people, and I’d like black people to stop thinking that every white person (and the police) has utter disdain for them. I’d like for Americans to remember that undocumented immigrants are people, too, and that most of them came to this country simply because they desire what most of us want: a better life for themselves, their children, and their extended families. I’d like for people to own fewer guns, and I’d like for those who own guns to own them responsibly. I’d like for people to turn off their televisions (and their video games) and to READ. MORE. BOOKS. Can we please, please, please stop making people like the Kardashians, the Jersey Shore clan, the Real Housewives of Atlanta or New Jersey or wherever, Wendy Williams, and all these other reality stars famous?!?! I’d like for all the dogs and cats in shelters (I didn’t forget the cats, Marcia Till) to find good and happy “furever” homes. I’d really like to know the truth about Bill Cosby; I mean, did a black dude really drug and rape all those white women in the 1960s and 1970s? Of course there’s much more that I would like for 2015, but I guess I’ll stop here…for now.

Jen, when I first read your Facebook post, I must admit that my immediate thought was to tell you to stop whining and to start doing and to not worry about the naysayers because only you have control over whether or not you’ll be successful at achieving your New Year’s goals. (I’m sure you can imagine me rolling my eyes at you and Jaya Martin if we were discussing this in my office, but I digress.) Anyway, I was wrong. Not to sound like some hippie from the 1960s, but we need to keep more love in our hearts, and we need to be more loving toward each other. Just as important, we need to be a little (a lot?) kinder and a little more encouraging than we have to be because, as Plato said, “…everyone you meet is fighting a harder battle.”

Henry James once wrote, “Three things in human life are important: the first is to be kind; the second is to be kind; and the third is to be kind.” Mother Theresa said, “Spread love wherever you go. Let no one ever come to you without leaving happier.” How much better would this country be if each one of us embraced these two dictums as we ventured into the world every day? 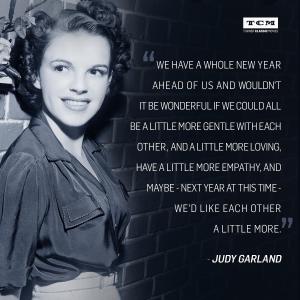 2 thoughts on “Do you have any New Year’s resolutions you wish to share with us?”

inner peace for lawyers, bankruptcy professionals, clients, and anyone else who needs it

A blog on atheism, writing, and dogs.

In the Mouth of the Lion

That will be an experience!